“People who are active want to stay active,” says Dr. Wayne Gersoff, and he should know. Not only is he a leader in sports medicine who’s helped keep top athletes – professional, collegiate, and high school competitors – in peak playing condition, but he’s also a lifelong athlete himself in multiple outdoor sports.

Dr. Gersoff has been helping Colorado athletes since the 1987, when he set up the first sports medicine program at the University of Colorado Health Sciences Center, while also overseeing the care of all the members of CU’s athletic teams. He went on to become the first team doctor for the Colorado Rockies and served the Major League Baseball team at all home games for eight seasons. He also cared for the Denver Grizzlies minor league hockey team and has served with the Colorado Rapids soccer squad since its launch 16 years ago. Not to mention the US men’s and women’s soccer teams and Denver Public Schools, Grandview and Chapparal high school athletes.

He says he got into sports medicine in part because “I’ve always played sports.” At Yale, where he earned his undergraduate degree and did his residency, he played soccer (his lifelong passion) and had a mentor, Dr. Aversa. It was Dr. Aversa who, recognizing Dr. Gersoff’s love of athletics, recommended that he take up sports medicine. He started when he was still a resident, covering all the various Yale teams’ home games. He followed with a fellowship at the University of Wisconsin under sports medicine pioneer Dr. Clancy.

That led to the opportunity at CU, where the athletes under his care included the 1990 NCAA champion Buffaloes football team. He fondly remembers treating legendary Buffs quarterback Darian Hagan, who tore his patellar tendon at the Orange Bowl. Dr. Gersoff repaired the injury, but there was still uncertainty as to whether Hagan would be able to play again the following season. But he did, and after he scored his first touchdown, Hagan found Dr. Gersoff and gave him a big hug.

Colorado Rockies right fielder Larry Walker was similarly thankful for Dr. Gersoff’s treatment. He’d fixed up Walker’s shoulder during the off-season, and when Walker returned to the outfield in 1997, he had an MVP-winning season, for which he thanked Dr. Gersoff with a large, framed LeRoy Nieman print.

In the meantime, after nearly a decade at CU, Dr. Gersoff left the university to go into private practice. A resident, Dr. Andy Motz, soon joined him, and with a few other specialists, they built the practice that became the Advanced Orthopedics group.

While working with all these sports teams, Dr. Gersoff kept up his own athletic pursuits, including soccer, running, mountain biking, and road biking. He and his wife stay active together by biking, hiking, and snowshoeing. In recent years, he’s taken up reining – a western equestrian discipline and precision-movement sport. Dr. Gersoff says he enjoys riding with his daughter.

When Dr. Gersoff’s daughters were children, he made it a point to schedule his professional commitments around their games and practices. Once, he recalls, he had to give a presentation in Baltimore, and he moved it so that he could fly home to Colorado in time to coach a game that afternoon. Today, his older daughter, who played two sports at Princeton, is a law school student at the University of Wisconsin, while his younger daughter, a highly accomplished equestrian athlete, is an undergraduate at Cal Poly in San Luis Obispo.

Both Dr. Gersoff’s personal Be Active lifestyle and his work with top athletes helps guide his treatment of patients with sports injuries. “Whatever activity they’re doing, they should do it for the love of it and not feeling like they have to do it,” he recommends. “When you enjoy it, you are willing to put the mental and physical preparation in, and while injuries may be unavoidable, the physical preparation will help minimize some of those risks.”

He encourages patients to remain active even after severe traumas. “You can move on,” he says of patients who’ve suffered a devastating injury, “but if it’s more severe, you can still be active, but you take a modified approach.”

As an example, he cites Juli Furtado, once a CU student who’d been a top slalom skier on the US National Ski Team before suffering multiple knee injuries. Dr. Gersoff successfully operated on her knee but told her he didn’t think it was wise to return to the slopes. Instead, he recalls, he suggested she take up biking. Within a year, she’d won a national women’s road biking race. She switched to mountain biking and became a champion in that sport, too, even racing in the 1996 Olympics before she finally retired.

Whether they’re world-class athletes like Furtado or everyday patients, active people who suffer injuries “don’t want to go from 100 to zero,” Dr. Gersoff says. “Part of our job is to listen and help them think of ways to preserve that injured body part for a long time.”

Has sports medicine helped you stay active after an athletic injury? Tell us your story. 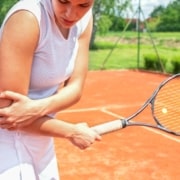 Athletes: How Sports Medicine Keeps You in the Game

Patient Perspectives: 8 things you should know before having rotator cuff s...