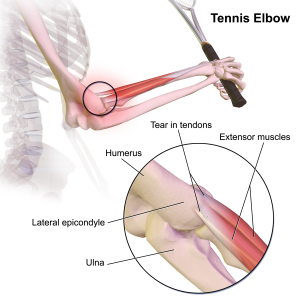 Tennis elbow or lateral epicondylitis is a condition in which the outer part of the elbow becomes sore and tender. The forearm muscles and tendons become damaged from overuse — repeating the same strenuous motions again and again. This leads to pain and tenderness on the outside of the elbow.

Any activity, including playing tennis, which involves the repetitive use of the extensor muscles of the forearm can cause acute or chronic tendonitis of the tendinous insertion of these muscles at the lateral epicondyle of the elbow. The condition is common in carpenters and other laborers who swing a hammer or other tool with the forearm,continuing activity after onset of the condition and avoiding mandatory rest may lead to permanent onset of pain and only treatable via surgery.

Symptoms associated with tennis elbow include, but are not limited to: radiating pain from the outside of the elbow to the forearm and wrist, pain during extension of wrist, weakness of the forearm, a painful grip while shaking hands or torquing a doorknob, and not being able to hold relatively heavy items in the hand. The pain is similar to the condition known as golfer’s elbow, but the latter occurs at the medial side of the elbow.

Tennis elbow is a type of repetitive strain injury, resulting from tendon overuse and failed healing of the tendon. In addition, the extensor carpi radialis brevis muscle plays a key role.

Early experiments suggested that tennis elbow was primarily caused by overexertion. However, studies show that trauma such as direct blows to the epicondyle, a sudden forceful pull, or forceful extension cause more than half of these injuries. It has also been known that incorrectly playing tennis may cause early stages of tennis elbow as shock is received when mishitting the ball.

To diagnose tennis elbow, the physician performs a battery of tests in which he places pressure on the affected area while asking the patient to move the elbow, wrist, and fingers. X-rays can confirm and distinguish possibilities of existing causes of pain that are unrelated to tennis elbow, such as fracture or arthritis. Medical ultrasonography and magnetic resonance imaging (MRI) are other valuable tools for diagnosis but are frequently avoided due to the high cost. MRI screening can confirm excess fluid and swelling in the affected region in the elbow, such as the connecting point between the forearm bone and the extensor carpi radialis brevis.

Diagnosis is made by clinical signs and symptoms that are discrete and characteristic. With the elbow fully extended, the patient feels points of tenderness over the affected point on the elbow—which is the origin of the extensor carpi radialis brevis muscle from the lateral epicondyle (extensor carpi radialis brevis origin). There is also pain with passive wrist flexion and resistive wrist extension (Cozen’s test). Resisted middle finger extension might indicate the involvement of Extensor Digitorum also. These tests shall be used to measure the prognosis of the condition.

Depending upon severity and quantity of multiple tendon injuries that have built up, the extensor carpi radialis brevis may not be fully healed by conservative treatment. Nirschl defines four stages of lateral epicondylitis, showing the introduction of permanent damage beginning at Stage 2.

Another factor of tennis elbow injury is experience and ability. The proportion of players who reported a history of tennis elbow had an increased number of playing years. As for ability, poor technique increases the chance for injury much like any sport. Therefore, an individual must learn proper technique for all aspects of their sport. The competitive level of the athlete also affects the incidence of tennis elbow. Class A and B players had a significantly higher rate of tennis elbow occurrence compared to class C and novice players. However, an opposite, but not statistically significant, trend is observed for the recurrence of previous cases, with an increasingly higher rate as ability level decreases.

Other ways to prevent tennis elbow:

Vibration dampeners (otherwise known as “gummies”) are not believed to be a reliable preventative measure. Rather, proper weight distribution in the racket is thought to be a more viable option in negating shock.

There are several recommendations regarding prevention, treatment, and avoidance of recurrence that are largely speculative including stretches and progressive strengthening exercises to prevent re-irritation of the tendon and other exercise measures.

One way to help treat minor cases of tennis elbow is to simply relax the affected arm. The rest will allow the stress and tightness within the forearm to slowly relax and eventually have the arm in working condition once again in a day or two, depending on the case.

Evidence from the Tyler study suggests that eccentric exercise using a rubber bar is highly effective at eliminating pain and increasing strength. Highlights of the study were described in The New York Times. The exercise involves grasping a rubber bar, twisting it, then slowly untwisting it.

Moderate evidence exists demonstrating that joint manipulation directed at the elbow and wrist and spinal manipulation directed at the cervical and thoracic spinal regions results in clinical changes to pain and function. There is also moderate evidence for short-term and mid-term effectiveness of cervical and thoracic spine manipulation as an add-on therapy to concentric and eccentric stretching plus mobilisation of wrist and forearm. Although not yet conclusive, the short-term analgesic effect of manipulation techniques may allow more vigorous stretching and strengthening exercises, resulting in a better and faster recovery process of the affected tendon in lateral epicondylitis.

Low level laser therapy, administered at specific doses and wavelengths directly to the lateral elbow tendon insertions, offers short-term pain relief and less disability in tennis elbow, both alone and in conjunction with an exercise regimen. Of late, dry needling has been gaining popularity in various types of tendinopathies and pain of muscular origin. Even in lateral epicondylitis, dry needling is widely employed by many physical therapists across the world. It is believed that dry needling would cause a tiny local injury in order to bring about various desirable growth factors in the vicinity. Dry needling is also aimed at eliciting local twitch response (LTR) in the extensor muscles, as in some cases of tennis elbow the extensor muscles of the forearm would harbor trigger points, which itself could be a major source of pain.

Orthosis is a device externally used on the limb to improve the function or reduce the pain. Orthotics are useful therapeutic interventions for initial therapy of tennis elbow. There are two main types of orthoses prescribed for this problem: counterforce elbow orthoses and wrist extension orthoses.

Counterforce orthosis has a circumferential structure surrounding the arm. This orthosis usually has a strap which applies a binding force over the origin of the wrist extensors. The applied force by orthosis reduces the elongation within the musculotendinious fibers. Wrist extensor orthosis maintains the wrist in the slight extension. This position reduces the overloading strain at the lesion area.

Studies indicated both type of orthoses improve the hand function and reduce the pain in people with tennis elbow.

Although anti-inflammatories are a commonly prescribed treatment for tennis elbow, the evidence for their effect is usually anecdotal with only limited studies showing a benefit. A systematic review found that topical non-steroidal anti-inflammatory drugs (NSAIDs) may improve pain in the short term (up to 4 weeks) but was unable to draw firm conclusions due to methodological issues. Evidence for oral NSAIDs is mixed.

In recalcitrant cases, surgery may be an option. Surgical methods include:

Surgical techniques for lateral epicondylitis can be done by open surgery, percutaneous surgery or arthroscopic surgery, with no evidence that any particular type is better or worse than another.

Text is available under the Creative Commons Attribution-ShareAlike License

Tennis Elbow: A pain with many names
Scroll to top Skip to content