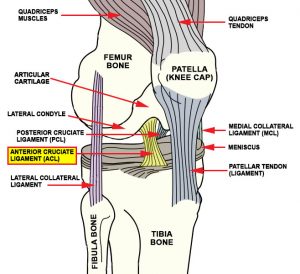 Formerly, ACL injuries occurred most often in a sports contact injury, when other structures were frequently involved. A particularly severe form of the contact injury is called the “unhappy triad” or “O’Donaghue’s triad“, and involves the anterior cruciate ligament (ACL), the medial collateral ligament (MCL), and the medial meniscus. Presently, ACL injury is more commonly a non-contact injury, such as a wrong landing from a layup in basketball. ACL injuries occur more frequently in athletes than in the general population and are prevalent in alpine skiing, football, soccer, basketball, rugby, wrestling, martial arts, and gymnastics. It is also known to be about three times more common in women than men.

The consequences of the injury depend on how much the stability of the knee is affected, and the extent to which other structures have been involved, and this can vary on a case-by-case basis. If instability is evident, particularly rotatory instability, then the menisci will get injured, sooner or later, setting the scene for progressive, degenerative, arthritis of the knee.

An ACL tear can present with a popping sound heard after impact, during a twisting movement or rapid deceleration, swelling after a couple of hours, severe pain when bending the knee, and buckling or locking of the knee during movement.nce falls associated with the knee giving way. Sudden falls can be associated with further complications such as fractures and head injury.

ACL injuries occur when an individual stops suddenly or plants his/her foot hard into the ground (cutting). ACL failure has also been linked to heavy or stiff-legged landing; the knee rotating while landing, especially when the knee is in an unnatural position.

Women in sports such as soccer, basketball, and tennis are significantly more prone to ACL injuries than men. The discrepancy has been attributed to gender differences in anatomy, general muscular strength, reaction time of muscle contraction and coordination, and training techniques. Women also have a relatively wider pelvis, requiring the femur to angle toward the knees. This angle towards the knee is referred to as the Q angle. The average Q angle for men is 14 degrees and the average for women is 17 degrees. Steps can be taken to reduce this Q angle, such as using orthotics. The role of genetics is currently speculative.

Significantly many ACL injuries occur in athletes landing flat on their heels. The latter directs the forces directly up the tibia into the knee, while the straight-knee position places the anterior femoral condyle on the back-slanted portion of the tibia. The resultant forward slide of the tibia relative to the femur is restrained primarily by the now-vulnerable ACL.

The pivot-shift test, anterior drawer test and Lachman test are used during the clinical examination of suspected ACL injury. The Lachman test is recognized by most authorities as the most reliable and sensitive test, and usually superior to the anterior drawer test. The ACL can also be visualized using a magnetic resonance imaging scan (MRI scan).

Though clinical examination in experienced hands can be accurate, the diagnosis is usually confirmed by MRI. It may also permit visualization of other structures which may have been coincidentally involved, such as a meniscus, collateral ligament, or posterolateral corner of the knee joint.

Interest in reducing non-contact ACL injury has been intense and the observed, increased, liability of the female gender in some sports has added to this. The International Olympic Committee, after a comprehensive review of preventive strategies, has stated that injury prevention programs have an effect on reducing injuries that is measureable, and that applies particularly to women. Further, paying attention to the balance of strength between hamstrings and quadriceps will help prevent the anterior cruciate ligament from being overpowered by over-emphasized quadriceps strength. It is also stressed that landing forces should be reduced together with emphasizing proper landing technique. It has been previously reported that landing on the heel, rather than forefoot with progressive transfer of weight to the heel, is potentially injurious to the ACL because of the hyperextension forces created. The closer the knee is to full extension, the more likely this is to occur.

The term for non-surgical treatment for ACL rupture is “conservative management”, and it often includes physical therapy and using a knee brace. Instability associated with ACL deficiency increases the risk of other knee injuries such as a torn meniscus, so sports with cutting and twisting motions are problematic and surgery is often recommended in those circumstances.

Patients who have suffered an ACL injury should be evaluated for other injuries that often occur in combination with an ACL tear and include cartilage/meniscus injuries, bone bruises, PCL tears, posterolateral injuries and collateral ligament injuries.

A torn ACL is less likely to restrict the movement of the knee. When tears to the ACL are not repaired it can sometimes cause damage to the cartilage inside the knee because with the torn ACL the tibia and femur bone are more likely to rub against each other. Immediately after the tear of the ACL, the person should rest the knee, ice it every 15 to 20 minutes, provide compression on the knee, and then elevate above the heart; this process helps decrease the swelling and reduce the pain. The form of treatment is determined based on the severity of the tear on the ligament. Small tears in the ACL may just require several months of rehab in order to strengthen the surrounding muscles, the hamstring and the quadriceps, so that these muscles can compensate for the torn ligament. Falls associated with knee instability may require the use of a specific brace to stabilize the knee. Women are more likely to experience falls associated with the knee giving way. Sudden falls can be associated with further complications such as fractures and head injury.

If surgery is decided upon (known as ACL reconstruction), either because obvious instability interferes with activities of daily living, or because the knee is subject to repeated, severe, provocative maneuvers, such as the case of the competitive athlete involved in cutting and rapid deceleration etc., then several issues need to be decided upon.

Before undertaking ACL reconstruction, the patient must accept that rehabilitation is mandatory, not optional, is fatiguing and time-consuming, and will last at least six months, more likely twelve, before optimal function is regained. Initial rehabilitation emphasizes recovery of range of motion, the preferred modality being isometric exercise that does not place stress on the knee joint. One goal is the achievement of full knee extension after two weeks. Although a minimum of six weeks is required for bony consolidation of the graft, walking is generally permitted. Thereafter, increased strengthening along with flexibility takes place until the important twelve-week post surgical timeline, when a more aggressive regimen begins. Rehabilitation is not only recovery but protection against future injury and attention to quadriceps strength, and importantly, ratio of hamstring to quadriceps strength as previously mentioned, will be emphasized.

Text is available under the Creative Commons Attribution-ShareAlike License